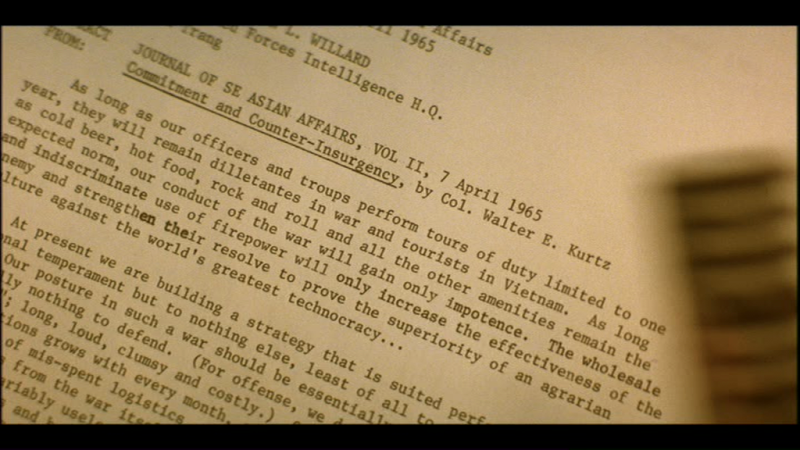 When America goes to war, the primary objective is to look good in the media. If that statement offends you, good. You have no knowledge of history beyond the happy horseshit they fed you at school and college. Right and wrong mean little in a democracy because it’s a popularity contest, so if the people are kept docile by stories of brave soldiers dying in a foreign land to keep them safe, long may it be so. Usually however, something goes horribly wrong, and ulterior motives are exposed. In the wars of Indochina (Vietnam), the media and the people turned against their government, giving birth to counterculture hippies who meant well but were nonetheless misguided for different reasons. Apocalypse Now, Francis Ford Coppola’s crowning achievement, like any true work of art, goes where these fake politicians and flimsy activists dare not: straight down the middle into the heart of darkness, using this conflict as a backdrop and ignoring the politics to explain the metaphysics of war itself.

Willard (Martin Sheen) has an assignment upstream into the heart of darkness in search of Walter Kurtz, the infamous Colonel whose “unsound methods” must be “terminated with extreme prejudice.” What he finds ostensibly is the absurdity of the Vietnam conflict, an absurdity which renders redundant any ethical judgements. What he finds in truth is an amoral spiritual experience of horror in which reality has been reduced to its primeval elements: a twilight zone where Eliot’s hollow-stuffed men are instinctively aware that death (or murder) is the only saving grace from the eternal whimper. Man, in search of the glory in overcoming the strife of war, laying witness to the horror and ruin of his own bestial nature.

“It’s impossible for words to describe what is necessary to those who do not know what horror means. Horror has a face – and you must make a friend of horror. Horror and moral terror are your friends.”

Wherever you find tropes that are pompous, bombastic and excessive (for the redux version add to these adjectives: bloated and tedious), elsewhere you will find an analogous release of artistic restraint that engenders a voracious ecstasy in the vein of the German New Wave mavericks. Like its source literary materials, Apocalypse Now is the result of a wrestle with death, a piece of art not bled from scars of passive suffering but borne of an aspiration to create genius, and of the active confrontation with the resulting darkness within. If the inconvenient truth of death and decay as seen by Kurtz is also the mad (indifferent, unfeeling, unthinking) predation of nature, then war also becomes animal and jungle. Now we are given an articulation of artistic truth in romanticist “nihilism” that borders on the religious: worshiping the beauty of an absurd drama where tragic heroism upholds the truth of ugliness in the will to power.

“You have to have men who are moral and at the same time who are able to utilize their primordial instincts to kill without feeling, without passion, without judgement.”
-Kurtz

In Kurtz is even modern man and his restless search for an unattainable freedom, ending in despair. The every man breaking free without sane self-curtailment as he yearns for more than simple obedience to the system, and that same man, now out of his depth, plunged into sacrilege as he succumbs to blunt nihilism. According to Kurtz, the turmoil lying beneath the queasy civility of the daily lives of men still familiar with the notion of righteous ambition leads to the slow, subtle suicide of tolerating every “harmless” philosophy while only becoming hostile to the obviously threatening. Hence unbridled, tribal, pagan warfare in an attempt to escape the hypocritical morality of the bureaucrats back home. 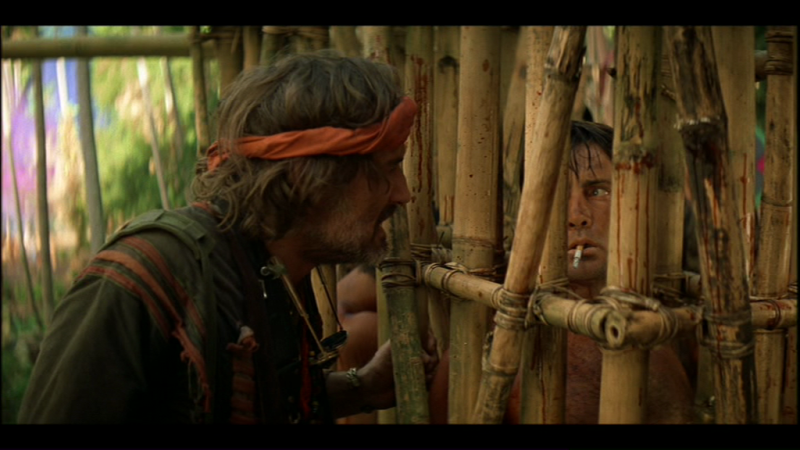 “And what would his people back home want if they ever learned just how far from them he’d really gone? He broke from them and then he broke from himself. I’d never seen a man so broken up and ripped apart.”
-Willard

A celebration, a meditation, a warning. Apocalypse Now is all these things because of the very “weaknesses” that make it indigestible on the superficial levels of pure entertainment (riveting first hour fizzled out into seeming anti-climax) or art house pretensions (expectations to pander with direct quotations from the literary sources). It is both and neither. A frustration if you miss its simplicity, an exercise in futility if you switch off and simply wait for attention grabbing fireworks. It is a smidgen of eternal truth, a smidgen more than any film since its release, and for this reviewer, possibly ever.