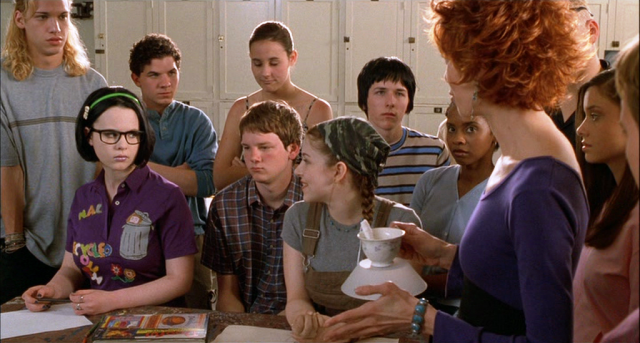 Jaded cinephiles looking back to classics in the vein of Bergman, Kurosawa, or (God be with us) Tarantino’s grindhouse influences, may miss a few gems of the more recent past, none more so than Terry Zwigoff’s Ghost World, which on first viewing is as close to masterpiece as you can get for a film this side of the turn of the century.

Call it “arthouse comedy”: be funny, smart, or interesting in some trivial but outlandish way, then be sad or generally dramatic in a twisty middle act, and finally conclude on some horseshit that either makes everyone feel better about themselves or else offer a falsely (read: dishonestly) ambiguous conclusion that confuses the slow kids — art as a device of egoism to artist and consumer, a self gratifying lie dreamed by the former instructing the latter to agree, and feel clever doing so.

In other words, pander to the neurotic complexes of your audience but be artsy about it – be a hipster. Superficially, Ghost World does all of these. In spirit, it does none of these, even if at times it’s this close to being hypocritical in its critique of hipsterdom. It’s hiply unhip, it’s meta, it’s art even. It’s brilliant. 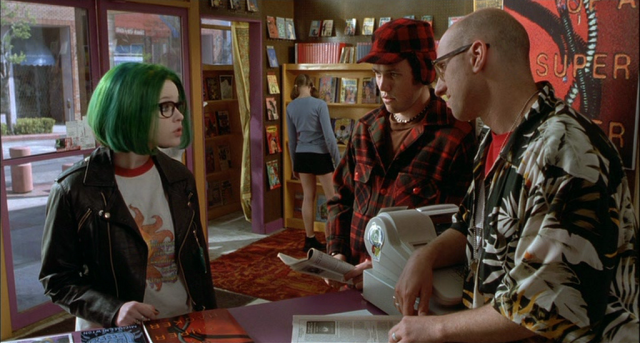 When a couple of outsider teens (Thora Birch, Scarlett Johansson) graduate from high school, they have to be “different” and not go to college like the other dorks, jocks, losers. What then? Well, lots, including mostly jokes and pranks adding up to zilch, but we’re young, so fuck it. One of the poor bastards (Steve Buscemi) at the other end of the stick turns out to be not as creepy as first thought (well, he does, but he remains an endearing idiot), leading to the central plot point: impossible and dumb love. If it sounds trite, it really isn’t, and give Ghost World credit for handling it with aplomb. Even better, repeatedly, little plot threads meet, sometimes ingeniously, symbiotically, the best being:

and b) hidden racism in contemporary culture instructed by America’s racist past, with the synergy of a + b causing controversy of the best kind.

Ghost World is masterfully executed, especially thematically. Shot for shot even. Playing out the existential crisis of teenage life in a time where everyone is clueless (“fuck everybody”), it dips in and out of well earned, Gods-Honest transcendence. When it becomes clear our protagonist should stop pointing the finger and look at herself for a clue, the film draws from a well of the intangible but real wisdom of an artistic consciousness to make out of a lone wolf a humble heroine. It would be flippant to fault it for relying on the holy fool, as he has unique perspective after all: be patient even in the face of tumult, wait for your ticket away from drama, then grab that bus en route to creation anew.