Heterodoxy/Orthodoxy: Modern Western man’s conflict between his irreligious inclination (will to iconoclasm) and his instinct to preserve the opposite (his religion of birth).

Descriptions of reality are inherently paradoxical, as they are subjective and therefore contingent upon the context in which they exist, which itself is only part of the objective reality attempting to be described. The more direct/concrete your descriptions, the more paradoxical they will appear, the more they require opposites. In other words, you cannot describe reality as much as experience it.

Orthodox, then, is the established standard of a period/place/theory, and heterodox contradicts it, naturally, acting as medium for heretics to form new paths of ideologue whether closer to, or further from, truth.

With this theological discourse as background, Luis Bunuel, surrealist filmmaker, offers The Milky Way, a pilgrimage of fools to Santiago, Spain, holy grail and absolute but seemingly contradictory truth, where the orthodox and heterodox collide and absolve in artistic ambiguity that nonetheless wills objective truth the way gods among men do.

Undeniably personal, this film is as close to religious experience as something like film is ever like to get. By way of comparison, Peter Jackson’s Lord of the Rings trilogy is cheap emotional guff, even if it’s based on an otherwise beautiful tale. Bunuel’s Milky Way is conflict on a metaphysical level where esoteric intellect confronts its limits to take a step back and find answers in simplicity and simpletons.

The riddles and metaphors can be viewed as distractions for the fool to play with and entertain (himself, and the casual observer) yet they serve a definite and purposeful narrative. Whether there is justification for the extra complexity you need to dig through to reconcile each and every image with the actual plot (two idiots on the road to salvation) is not that important.

In a display of masculinity, strong emotion is put in its proper place: not quite mocked but not indulged in as remedy to crisis. Not expelled either, but cast aside when it becomes clear it was trivial or superfluous. In fact it is only evoked on one occasion, where the beauty of the Virgin Mary inspires a character’s belief. By contrast, rote nihilism is applied elsewhere to equal magnitude if opposite effect. 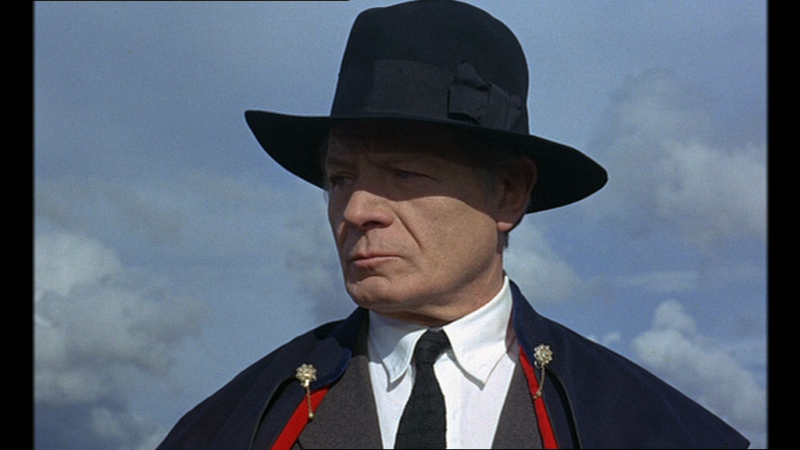 From The Milky Way we extract religion in abstract form, that which worships a part of life representing the whole. It’s Werner Herzog’s Aguirre where Nature wins and we pity the mad fool who risked all and lost but instead of standing in awe at the greatness of that loss we move along without pause to the next struggle, without care for small ego fixating the eye on contracted fear.

If in so doing we make decisions while considering all factors at once, it is like tapping into a part-intellectual, part-metaphyisical primordial instinct to arrive at knowledge through reasoning that distinguishes cause from effect to determine the root cause of phenomena, on the path to reaching Kant’s noumena, so that when often times the uneducated peasant contradicts the learned man and his precise definitions, both parties could turn out to be in agreement while squabbling (perhaps at sword-point) over mere semantics.