Easily misconstrued as merely a sarcastic look at the plight of the counterculture and its ill defined ideas of simple minded freedom, Easy Rider is rather an astounding psychedelic fever dream of hypnotic, intoxicated meditation. Dennis Hopper’s one big directorial hit and an inspiration for a generation, it starts as a simple search for freedom, but by the end finds the promised land a waste land of desolation, a paradise lost. It is in fact an anthropomorphic American reverie of another lost generation in mourning for what could have been. 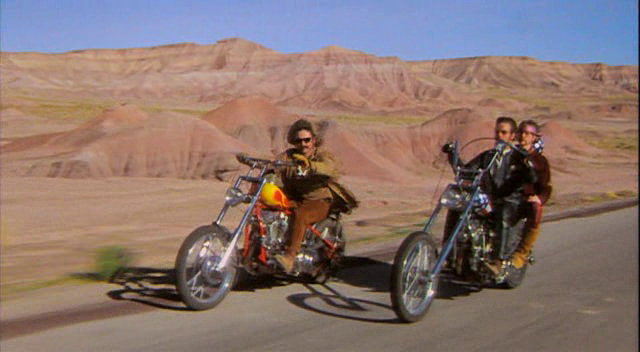 Two chilled, distilled bikers, Wyatt (Peter Fonda’s Captain America) and Billy (Hopper), deal drugs with Mexicans and new money brats to fund a cool trip to Mardi Gras (free fracas down South). Along the way they meet a series of morons, sideshows, and sex, culminating in an LSD bad trip, one of the most memorably haunting, naked, yet still humorous sequences of dementia and torment in film history.

Initially, their effervescent cool carries them through in a manner only hippies of the era could fashion, but gradually, subtly, it fizzles out. The fun never lasts too long, the highs are repeatedly cut short, muted, and distanced from positive audience indulgence. Instead, the growing disillusion is, perhaps despite itself, painted thick with a remarkable visual flare that somehow captures the subconscious of a people busying themselves with a series of short term thrills as a means of ignoring the decay. What makes this flick great is that these effects serve the overarching tropes of an extra-textual legacy: America — like an aimless hippie looking for the right things in the wrong places — as a self destructing organism.

We blew it, man, and nothing can make up for the time however wasted, in other words. That it was indeed wasted is generously hinted at with those lingering words. If “we” equals America/The West, then the trope gains significance.

While seemingly knocking easy targets of the America of governmental oppression, capitalism, and backwards hicks, the film reaches a point of nihilistic abandon so as to ignore the political and social memes and lose itself in the ride to free oblivion, gazing long enough to see the abyss stare back at the chaos and ruin inside itself, until what’s left is a cold shrug at freedom in flames.