Skip to content
Posted on December 1, 2013September 1, 2019 by Future Consciousness 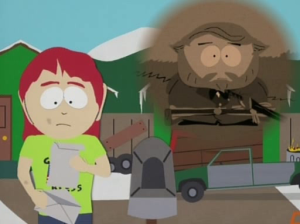 When a bunch of drunken hicks from the mid-west raid the serene everyday town of Topeka, Kansas (looking more like Topeka 100 years ago), South Park comes into its own not in terms of seriousness, but narrative scale and structure, helped along with a flurry of infectiously catchy “motifs.”

Sing hails to the Confederacy as Cartman’s unique southern drawl takes arguably its best form, and the first signs of his manipulative nature make themselves known. Also, a great example of one of those memorable memes from South Park that spread over the English speaking world circa 2000 (the deftly simple, “I hate you guys.”)

“And she was forced to live off her own feces for several days.” -News anchor Tom

“If I told you that I’d just be a no good Yankee son of a bitch.” -Butters

“Pretty soon Stan and Kyle will be my propertah.” -Cartman

“We’re raising all kinds a hell, see. It’s probably the most fun I’ve had in several months.” -Butters

“Dear Guys, words cannot express how much I hate you guys.” -Cartman