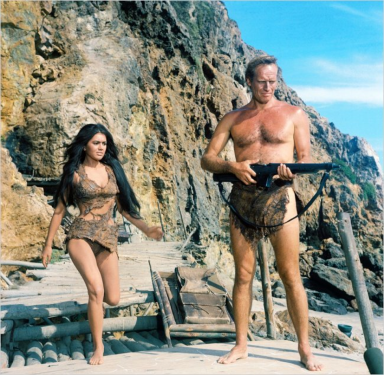 This movie was ahead of its time in a way last year’s Interstellar is not. Forty years from now, it will still be seen as more brave and more honest than Nolan’s cheeseball mindtravel. The latter isn’t ahead of our time at all, only smarter than its target audience. Big difference.

The modern Planet of the Apes remakes don’t even deserve to be mentioned in the same breath as this thing. By comparison it’s a prescient piece of genius. If you’ve ever thought of how evolution could work in reverse, you will concur after watching. At times foolish, at others simply majestic, it achieves if nothing else the questioning of prejudice.

A group of astronauts (three men to one woman, the sly choice a subversion of polygany) are sent on a deep space expedition, the apparent objective of which is as much to prove the theory of time condensation at near-light speed as it is to explore (and conquer) outer space, expanding “our” (American) empire. Shit happens and they crash on an unknown or unplanned planet; the female trooper dies along the way, her corpse a prescient ape-like effigy, leaving the men to perhaps find alien mates to start up the new population. Soon they discover life and a species of mute hominids, but are then captured by talking, horse riding, gun wielding apes, the apparent kings of the food chain on this upside down planet.

The spine of the narrative is a tired diatribe: Victorian renunciation of scientific heresies. But this dumbness is only eclipsed by its sheer audacity as a red herring. Then there’s the droll mimesis, smug at times, used as short cuts to grand ideas instead of straight exposition, perfectly suited as it happens to Heston’s theatrical delivery of the same.

Ultimately this is just part of the sucker punch, especially to the critic who mulls each detail, looking for weak points to expose the myth, to call out the prophet as charlatan. Meanwhile, running with the thesis, it should have been obvious all along, and we (the critical audience) were gullible enough to be strung along. Much like the search for truth in the face of reality.