If Star Trek is for prepubescent geeks in mom’s living room, and Star Wars is for the easily swayed teenage and adult-stuck-in-adolescence variety, then Videodrome is for nerds of a more refined kind, those who love the psychology and philosophy of mind and its allure to the beyond where true transcendence lay. 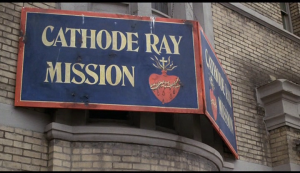 Max Renn wants a real looking sexual torture show called Videodrome for his sleazy television station, but when he gets hold of the elusive tape, it puts him in an ever mutating dizzy fit of headaches and hallucinations. The more he finds out about it, the more dangerous it sounds, the more he’s enticed, so he confronts the people behind it, as Cronenberg adds plumage to the idea of masses of idiots getting subtle programming from the TV in delightfully bleak fashion.

“Watching TV will patch them back into the world’s mixing board.”

The first act is a sexual conception of the Videodrome virus, the second a mandatory exposition seeping it into conscious apprehension. Conscious apprehension, where it sits, waiting, as you sit inert, ready to lull you into hallucination? Perhaps, and in this way contributing, if you like, to Baudrilaude’s simulacrum in an appropriately meta way: our controllers program us with media, and this film is not far from the same. But Videodrome can at least attest to some form of artistic integrity. 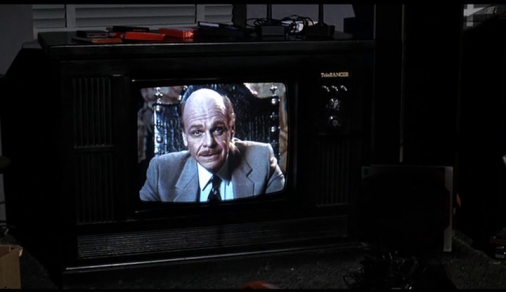 “The battle for the mind of North America will be fought in the video arena, the Videodrome.”

Of course, Cronenberg takes it a step further to develop his idea of the “new flesh,” the sexually initiated fusion of our technology, biology, and ideals; our ultimate destiny (desire?) being disembodied Word.

“The television screen is the retina of the mind’s eye. […] television is reality, and reality is less than television.”

“[…] public life on television [is] more real than private life in the flesh.” 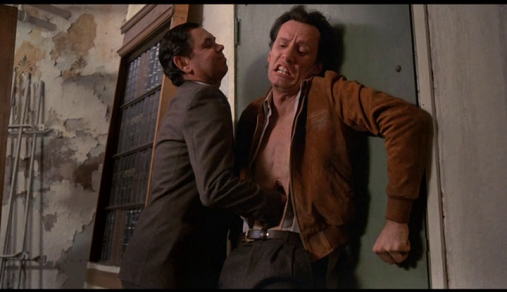 Max is now confronted by Videodrome co-op Barry Convex, who manages to invoke the Controllers from Aldous Huxley’s 1932 novel Brave New World (warm, charismatic authority helping you to your quiet, sedated demise). The Videodrome tumour well into malignancy, it takes over as Max’s new reality.

In a memorable scene that converges the prescient running theme of virtual reality with the video game format itself, the crux of the “Videodrome Problem” is defined: change the program and stop the evil plans of the would-be oligarchs. In its place, the new flesh, “man’s next phase as a technological animal,” seems to propose little better.

“Don’t be afraid to let your body die.”

Cronenberg’s highpoint may well be The Fly, harrowing in its simplicity, as if a humble Kafkaesque narrative narrowed down the essence of his ideas with a brutal honesty befitting them. With Videodrome though, for a thing of its kind, there are few comparisons, as it’s really one of a kind. Its catharsis is a void because it does not exist, instead requiring repeated viewings for any real meaning to be extracted, which will therefore ring intellectually. If anything, it’s a landmark film that predicts the mass hypnosis of the populace as an ever-increasing rate of proclivity toward epileptic visions of sex and violence.